Skip to content
The results of a clinical phase II study indicating that cyclosporine counteracts brain injury in a subset of stroke patients undergoing thrombolysis has been published in an article co-authored by one of NeuroVive’s research partners, professor Michel Ovize of Hospices Civils de Lyon (HCL).

The French phase II study investigated the neuroprotective effect of cyclosporine, the active substance in NeuroVive’s product NeuroSTAT®, in 127 stroke patients who also received thrombolysis treatment (to reinstate the occluded blood flow) in the period 2009-2013. For all patients included in the study, the extent of brain injury was 24% lower in the cyclosporine group which was not statistically significant. In a smaller sub-cohort of patients with blood clots in major arteries (proximal occlusion) and where thrombolysis had been successful, however, cyclosporine demonstrated a statistically significant reduction of as much as 69% of the volume of brain injury compared to placebo. No differences were observed between the groups in terms of behavior or neurological function three months after treatment.

The results are outlined in the article “Cyclosporine in Acute Ischemic Stroke” by Professor Norbert Nighoghossian, Professor Michel Ovize and other participants in the multicenter trial. The article was published in the scientific journal Neurology. For an online version of the article, go to:

“The neuroprotective qualities demonstrated in the study are very promising, and we’re prioritizing a follow-up study within the framework of our partnership with Professor Ovize and Hospices Civils de Lyon (HCL), using our product NeuroSTAT®. Our castor oil-free formulation of cyclosporine is a pre-requisite for treating larger patient groups. Further, the findings confirm and justify our sustained focus on developing new cyclophilin inhibitors aimed at this patient group,” commented Mikael Brönnegård, NeuroVive’s CEO.

“It’s important to note that the cyclophilin inhibitor cyclosporine didn’t significantly reduce brain injury in all patients undergoing thrombolysis to restore blood flow to the brain after stroke. A significant effect was noted only by a so called post-hoc analysis in a smaller patient cohort where impending major brain attack was suspected due to a proximal occlusion of the culprit artery in combination with successful restoration of blood flow. Efficacy needs to be confirmed in larger studies focusing on this specific patient group, or using a cyclophilin inhibitor with improved penetration across the blood-brain barrier,” commented Eskil Elmér, NeuroVive’s CSO. 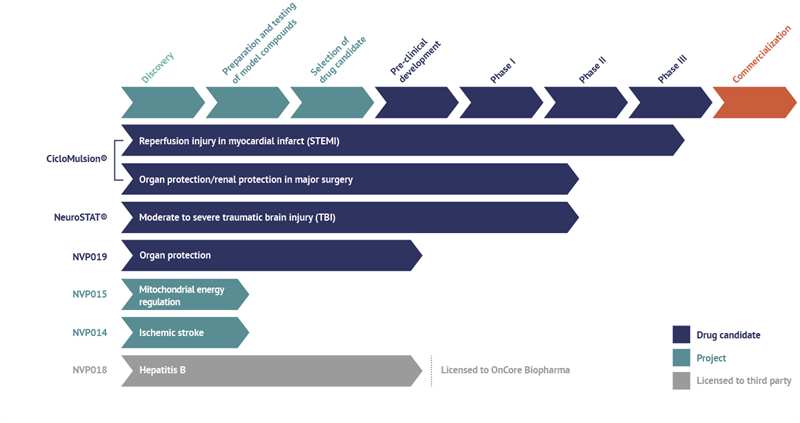 CicloMulsion®
NeuroVive’s product CicloMulsion® is the first cyclophilin inhibitor developed for the treatment of reperfusion injury. The product’s potential in the treatment of myocardial infarction is currently being evaluated in a clinical phase III study. The last of a total of 972 patients was enrolled on 16 February 2014. The results of the study are due to be announced in 2015 following the completion of the one-year follow-up of all patients and the analysis of the study data. CicloMulsion will also be evaluated in a number of clinical phase II studies for the treatment of other acute heart and kidney injuries within the framework of the collaboration with Hospices Civils de Lyon and Skåne University Hospital in Lund, Sweden.

NeuroSTAT®
NeuroVive is developing NeuroSTAT® for the treatment of patients with moderate or severe traumatic brain injury. NeuroSTAT® is currently being evaluated in a clinical phase IIa study at Copenhagen University Hospital. The study focuses on safety and pharmacokinetics, and 10 of 20 planned patients have been enrolled so far. A phase III study is currently being planned and designed. NeuroVive has secured orphan drug designation for NeuroSTAT® for moderate and severe traumatic brain injury in the US and EU, which implies market exclusivity for seven years in the US and ten years in the EU, from the date NeuroVive obtains market authorization.

NVP019
NVP019 is NeuroVive’s primary drug candidate in the company’s new portfolio of potent cyclophilin inhibitors belonging to a family of molecules known as Sangamides based on a new and unique polyketide engineering technology. NVP019 is being developed as the next generation cyclophilin inhibitor for reperfusion injury in heart attack, but also for other acute conditions where general protection of vital organs is central to counteracting the progression of the disease. An intravenous formulation will be evaluated for this purpose in collaboration with external parties such as Hospices Civils de Lyon within the framework of the OPeRa program.

NVP018
NVP018 is an oral formulation based on the same active substance as NVP019. It has been developed for treatment of Hepatitis B and was outlicensed to OnCore Biopharma (www.oncorebiopharma.com) in September 2014.

Other products
More information about all products developed by NeuroVive can be found at http://www.neurovive.se/index.php/en/research-development/research-overview

For Investor Relations and media questions, please contact:
Ingmar Rentzhog, Laika Consulting, Tel: +46 (0)46 275 62 21 or ir@neurovive.se
It is also possible to arrange an interview with NeuroVive’s CEO Mikael Brönnegård or COO Jan Nilsson at the above contact.

NeuroVive Pharmaceutical AB (publ) is required to publish the information in this news release under The Swedish Securities Market Act. The information was submitted for publication on 7 May, 2015, at 8.30 a.m CET.

Abliva develops medicines for the treatment of primary mitochondrial diseases. These congenital, rare and often very severe diseases occur when the cell's energy provider, the mitochondria, do not function properly. The portfolio includes projects at different stages and ranges from early discovery phase to clinical phase.